This is an update for regular readers who enjoyed my last post on making bread for the first time. I’ve advanced a little bit since then. I’m up to about a dozen loaves now.

I’m by no means expert at it, but I’ve been having fun and experimenting with making bread from scratch. One of my experiments was grinding my own wheat and baking it. It was a – shall we say – mixed success. Most cooks, I suppose, only show their successes. But I figure, well, if you don’t make mistakes, how are you going to learn? So, I decided to share this experiment anyway.

It didn’t rise as much as I would have wanted and it was rather heavy. But here’s a photo log:

First, I bought some hard red wheat – the kind that’s grown locally and is sold in bulk at Rainbow Natural Foods. 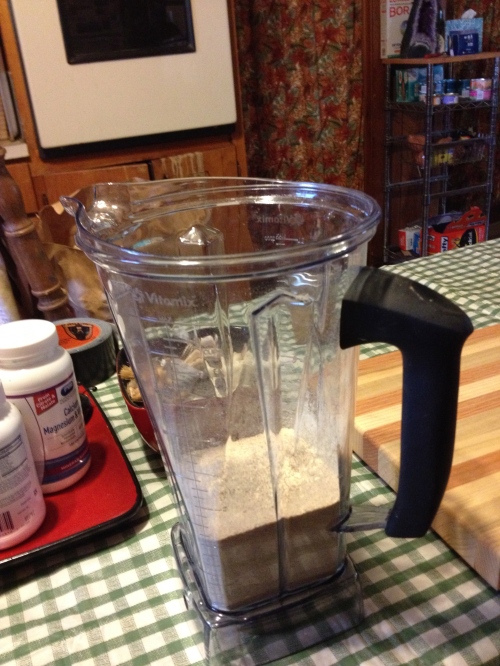 I ground the wheat berries in my Vitamixer. (Photo by Jim Ewing)

Then, I ground it with my Vitamixer.

The ground wheat looked good in the mixing bowl. (Photo by Jim Ewing)

It looked pretty good in the mixing bowl.

The ground wheat kneaded to a nice consistency. (Photo by Jim Ewing)

It also looked good and felt good to my hands in kneading it.

It didn’t rise very well, though. (Photo by Jim Ewing)

It never really rose to fill the pan, however. I waited and waited. Finally, I popped it in the oven, hopping it might expand a little more, but that didn’t happen either. By contrast, the other two loafs I was making, rose quite well and came out with a nice size and consistency.

Those I gave away. This one, I kept.

Even bread “mistakes” can taste good! (Photo by Jim Ewing)

This “mistake,” since it was small and heavy, I ate! And know what? It was great! I whipped up some cream and slathered it in honey from my bees, and it was heavenly. 🙂

As I learned in hindsight, I didn’t grind it fine enough. Next time, I’ll know better.

Here are some loaves – two with organic white flour, one with organic whole wheat flour, both store bought! – I’m waiting to rise to pop into the oven:

I’ve been a regular little production line, creating loaves today. These are rising and will be set in the oven in a couple of hours. (Photo by Jim Ewing)

I expect that I will return to my grinding my own wheat experiments, and probably using other flours, but since these were meant to be given as gifts, I figured I’d better stick to the tried and true.

One response to “I’m Loafing Today – As in, Making Bread!”